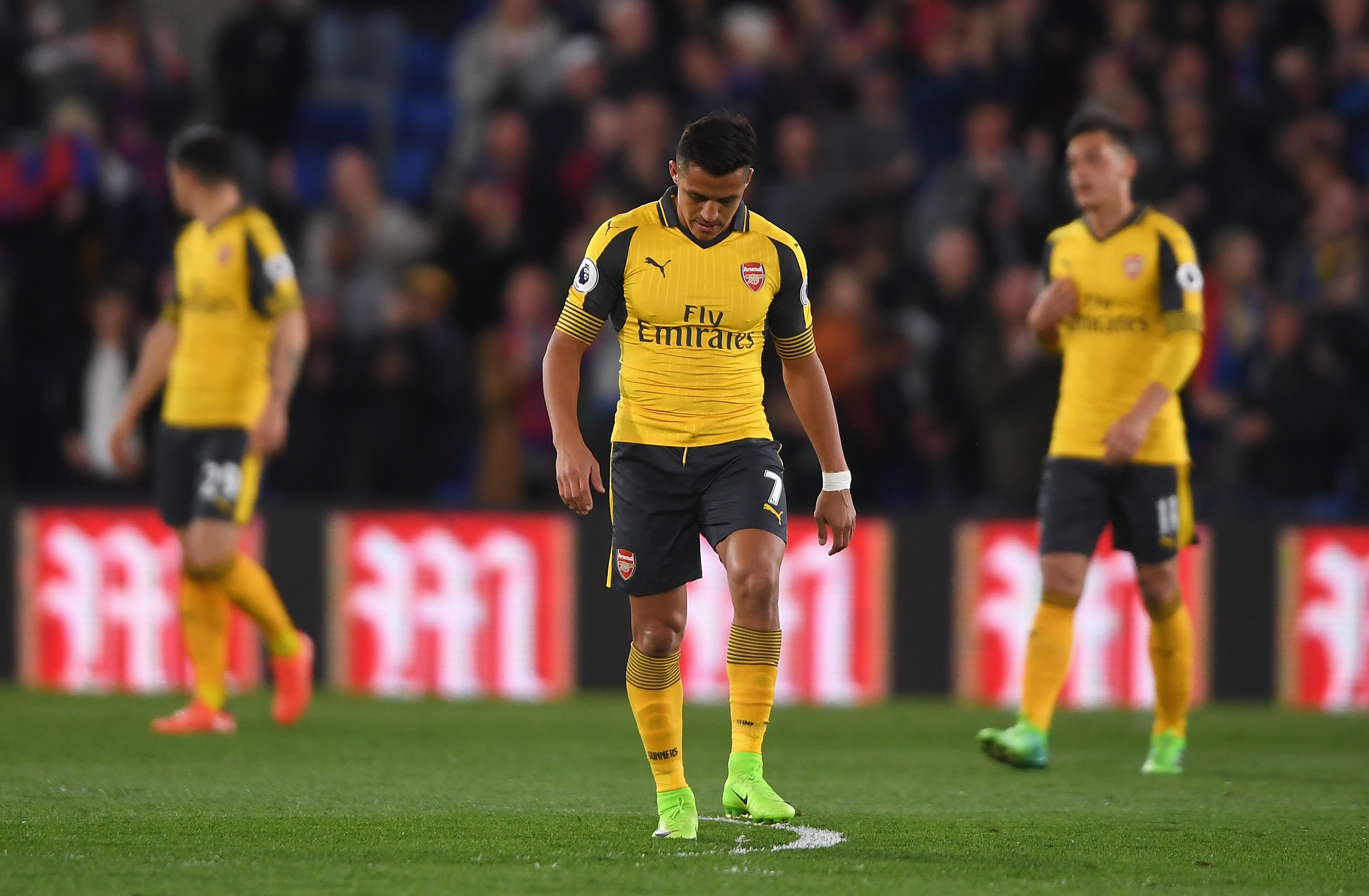 Mesut Özil. Alexandre Lacazette. Pierre-Emerick Aubameyang. Vicente Guaita. Aaron Wan-Bissaka. Captain Laurent Koscielny and leading scorer Aubameyang were starting their third game in eight days but this was an under-par performance by a team looking to finish in the top four for the first time in three seasons.

The Gunners monopolised possession but it required a double change at half-time to help them get back on level terms after Benteke's header separated the teams at the interval.

Alex Iwobi, one of the substitutes, was involved in Ozil's lovely equaliser, his pass finding Alexandre Lacazette to set up the German.

That should have been the signal to push on, yet Arsenal fell away and, despite a late rally which saw Aubameyang score, will fall out of the top four if Chelsea beat Burnley at Stamford Bridge on Monday BST.

Despite gathering only eight points from their first 12 games, Palace will spend a seventh successive season in the top flight after securing safety with three matches to spare.

While their home form has been disappointing, Palace have played with freedom and confidence on the road. Having won at title-chasing Manchester City, they can now add a first win at Arsenal for 25 years to their impressive collection of away achievements.

Manager Roy Hodgson will hope Benteke can kick-on after ending a a run of 19 appearances, 25 shots and days without scoring.

The Belgian, who once scored 19 goals in a Premier League season for Aston Villa, missed a glorious chance to double Palace's lead on the stroke of half-time.

It did not prove costly, Palace showing character to respond with two quick goals after Ozil's equaliser. Scott Dann and Martin Kelly were strong at the heart of the defence, while skipper Milivojevic was involved in two of his side's three goals.

Foul by Matteo Guendouzi Arsenal. Aaron Wan-Bissaka Crystal Palace wins a free kick in the defensive half. Delay over. They are ready to continue.

Attempt saved. Alex Iwobi Arsenal right footed shot from the centre of the box is saved in the bottom left corner. Assisted by Matteo Guendouzi.

Attempt missed. James McArthur Crystal Palace right footed shot from the right side of the box misses to the left.

Assisted by Jordan Ayew. Attempt blocked. Jordan Ayew Crystal Palace right footed shot from the right side of the box is blocked. Assisted by Wilfried Zaha.

Foul by Mesut Özil Arsenal. Jordan Ayew Crystal Palace wins a free kick on the right wing. These comments are now closed. A thrilling new series for your new year from BBC Sounds.

Get latest scores and headlines sent straight to your phone, sign-up to our newsletter and learn where to find us on online.

The latest rumours and stories from around the world of football. Analysis and opinion from our chief football writer.